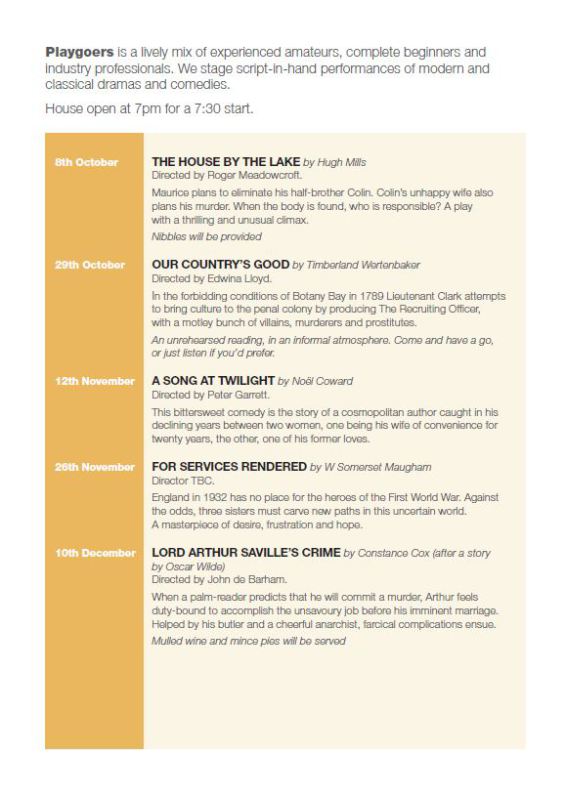 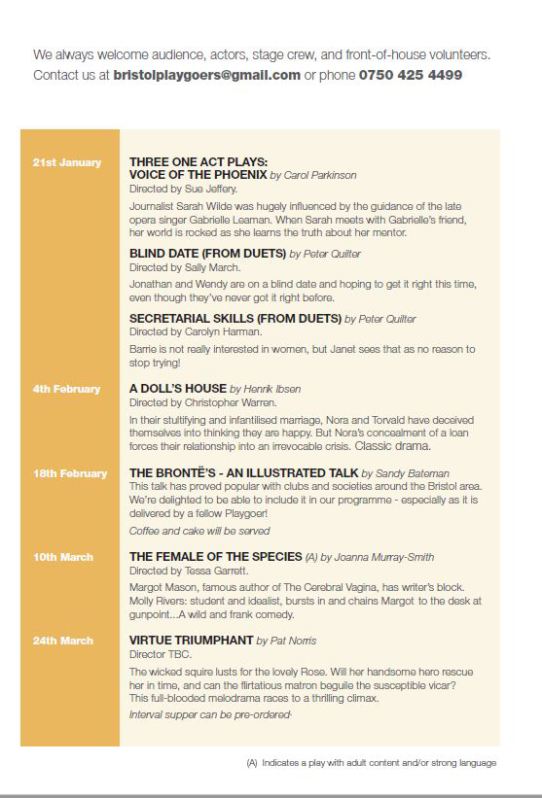 (A) Indicates play with adult content and/or strong language

A vicar’s widow can now do and say what she pleases, but finds her past and her relationships are not quite what she thought.  A new comedy for Playgoers and free entry for guests on this evening.

Rattigan’s masterpiece portraying the destructive love affair between a judge’s wife and an ex-RAF pilot.
A raffle will be held.

WAITING IN THE WINGS by Noel Coward. Directed by Edwina Lloyd.

An unrehearsed, reading circle approach to Coward’s comedy that is set in an actresses’ retirement home. Come along to watch or read if you wish!

COMMEMORATION: WORLD WAR ONE IN WORDS AND MUSIC. Directed by Edwina Lloyd and Betty McInerney.

A Playgoers’ compilation marking the anniversary of the Great War’s armistice.

27th November, Tuesday at Newman Hall
**Unfortunately this reading has been cancelled**

A DOLL’S HOUSE by Henrik Ibsen. Directed by Christopher Warren.
As financial security beckons cracks gradually appear in a couple's relationship and an intense struggle develops between love and truth, honour and betrayal.

Three couples come together on three Christmas Eves for festive celebrations with darkly comic results.
Mince pies and punch will be served and a collection taken for POD, the club's adopted charity.

MY MOTHER SAID I NEVER SHOULD (A) by Charlotte Keatley. Directed by Sue Jeffrey.
An award-winning play about the relationships, bonds and influences between mothers and their daughters set over four generations.

An Edwardian play with enduring and enthralling things to say about financial sharp practice, social values and personal crisis.

THE HAPPIEST DAYS OF YOUR LIFE by John Dighton. Directed by Janet Adams.

A boys’ school and a girls’ school are forced to co-locate during WW2 with comic and farcical results. Frank Launder, of St Trinians fame, made it into a hit film.

A raffle will be held.

THE FATHER by Florian Zeller. Directed by Jane Meadowcroft.

A father copes with the onset of dementia. This play confounds expectations and has the edge of a mysterious, sinister thriller. A Playgoers’ premiere.

A rare excursion into Greek Tragedy for Playgoers, as we present the towering tale of the flawed and cursed king.

THE GOVERNMENT INSPECTOR by Nikolai Gogol. Directed by Adrian Brown.

A new take on this classic comedy of corruption and greed – and another Playgoers’ premiere.

The end-of-season supper will be served during the interval. Details to follow.

If you have any queries or wish to join, please contact us: